The Narratives and Illusions of Investment Management

The Narratives and Illusions of Investment Management

Over my next few letters, I’ll take you through examples of what to look out for and give you a sense of the types of questions to consider when evaluating potential funds.This week, we look at two themes: Stories and Numbers; and What’s in a Name.

After reading my last letter on the Fear of Missing Out (FOMO), where I touched on the need to ask lots of questions when evaluating investment funds, a colleague remarked, “great advice, except, I wouldn’t even know where to begin, or what kind of questions to ask. Please tell me more!” So, Alexandra, this week, I respond to your feedback.

Investors often interpret a fund’s past performance as evidence of a strategy’s merit or the skill of its management team. So, it’s no surprise they chase performance. Numerous studies, including one of the most important ones1 on the topic, found that funds that have outperformed over the past year tended to continue to outperform over the following year. However, this performance edge largely disappeared over longer horizons, mainly because the market’s preference for stocks – or investment styles – changes over an economic cycle. It indicates that there isn’t a reliable relationship between past and future performance over horizons longer than three years. It’s also evidence that investors should not hire, or fire, investment managers (or select a fund) based on past performance alone. Why? Because on its own, past performance is not a clear measure of skill. For many reasons, including bad luck, even the best managers don’t outperform consistently given their pre-disposition to stocks with a common set of characteristics. As such, when evaluating investment funds, investors should combine performance analysis with an assessment of other quantitative and qualitative factors, such as a fund’s fees, quality of its investment process and management team, and the stewardship practices of the asset management firm. We group these into what we call our ‘8P Evaluation Metrics’ (where we ask questions about the Philosophy, Process, Progress, Purpose, People, Perspective, Passion, and Performance of a team and investment strategy). This rounded approach improves our odds of success for our clients.

Over my next few letters, I’ll take you through examples of what to look out for and give you a sense of the types of questions to consider when evaluating potential funds.

This week, we look at two themes: Stories and Numbers; and What’s in a Name.

Doing your due diligence is more than just collecting information or ticking a checklist of questions. This formula does not work. As humans, we have many biases that lead us astray when making assessments. How information is presented to us affects what we think.

Over my 20-year career, I’ve attended at least a thousand due diligence meetings and read at least as many pitch books. I can tell you they all look pretty much the same on the surface. Most people, however, miss a wealth of information during these meetings because it’s not found on any standardized checklist.

Let me show you what I mean. Take a moment to watch this short video (some of you may have seen this before).

How many passes did you count?

Did you see the gorilla? Don’t feel bad if you didn’t. In experiments at Harvard University, half the people who watched the video and counted the passes missed the gorilla.

Did you see the curtains change colour, or that one of the players in black left the game? No, then watch the video again.

1. we miss a lot of what goes on around us; and

2. we have no idea we are missing so much.

So, you may be saying, that was an entertaining exercise, but what does it have to do with numbers and stories? (By the way, if you’re wondering, the answer to the number of passes is 16).

This exercise illustrates my point. When we are so focused on a task, such as interviewing an investment management team, we often miss significant details.

Numbers and stories are at the core of how information is relayed and how we make decisions. However, both numbers and stories have traps, so how we process them is critical to decision making. With numbers, we tend to rely on history. Historical data is often presented as ‘proof’, but it’s really the allure of proof. History is not proof, just “proofiness”, as Nobel Prize winning economist, Paul Samuelson, was fond of saying.

Stories, well they are powerful. Stories connect with people’s emotions, they are remembered, and they elicit action. Why is this so? There is evidence that we are all wired to connect to stories. Perhaps it’s because, for centuries, knowledge was passed from one generation to the next through storytelling. Professor Paul J. Zak found that stories elicit chemical and electrical reactions in our brains. He explains it in this video.

Stories, however, can be dangerous, not just for the listener, but also for the storyteller. For the storyteller, it is easy to wander into an alternate form of reality, where the line between good stories and fairy tales get crossed. For the listener, stories can appeal more to their emotions than to reason. Stories also play on our irrationalities, leading us to trust and believe without question. Ultimately, a good story is less about specifics and more about big picture. With investment funds, it usually speaks to star investment managers, pedigrees, track record, grand visions of the future and stock exploits.

By now you might be thinking, “if I can’t trust the story, then I should just believe the numbers.” No, I’m not saying that. I understand the appeal of numbers. In a world of uncertainty, numbers offer us a sense of precision and objectivity and are a counterbalance to stories. As our CEO, Chris Reynolds, is fond of saying “numbers don’t lie.” However, I would have to disagree with Chris. The precision that we seek in numbers is often illusionary. There are a multitude of ways in which our own biases can find their way into numbers. As Aswath Damodaran, Professor of Finance at the Stern School of Business at New York University, and sometimes known as the 'Dean of Valuation' writes “we number crunchers often use numbers to both inform and intimidate.”

So, the first lesson of due diligence: Avoid the temptation to let the stories and numbers that are presented to you drive your investment decisions. Instead, break through the narrative and dig into the numbers. It is important to understand the philosophy, process, and people that drive those investment results.

What’s in a Name (of an investment fund)

1. It should be readable and writable

2. It should be unique

3. It should be short, punchy and memorable

4. It should look good written down and sound cool to say

5. It should evoke an emotion, feeling or idea

Ok, let’s be honest. An investment fund’s name is rarely cool to say, let alone unique. When it comes to investment funds, the issue with these rules is that names don’t convey what an investment solution is or what it’s supposed to do. Also, in the investment industry, as with other industries, there is liberal use of certain words such as ‘value’, ‘dividend’, ‘balanced’. To illustrate what I mean, let’s look at the following two funds as an example:

On the face of it, these look like two completely different funds. The only thing they seem to have in common is that they are both distributed by Manulife and, from their names, focus on the investing in the U.S. However, when you dig a little deeper, you will find that the two funds have a lot more in common than their names suggest.

A quick look at my Morningstar Direct application (if you don’t have access to Morningstar Direct, a quick review of the funds’ holdings documents) will reveal that the Manulife US Balanced Value Private Trust’s assets are 99.8% invested in the Manulife US Monthly High Income fund. In other words, the first fund’s only investment is the second fund. The second interesting fact is that the Manulife US Balanced Value Private Trust isn’t a value fund at all. A simple review of the investment style (see chart below) shows that the Private Trust, and the underlying US Monthly Income Fund, are very much growth funds in style. Wolf is sheep’s clothing? You decide. By the way, this isn’t to pick on Manulife. This is just one example of many naming issues in our industry. 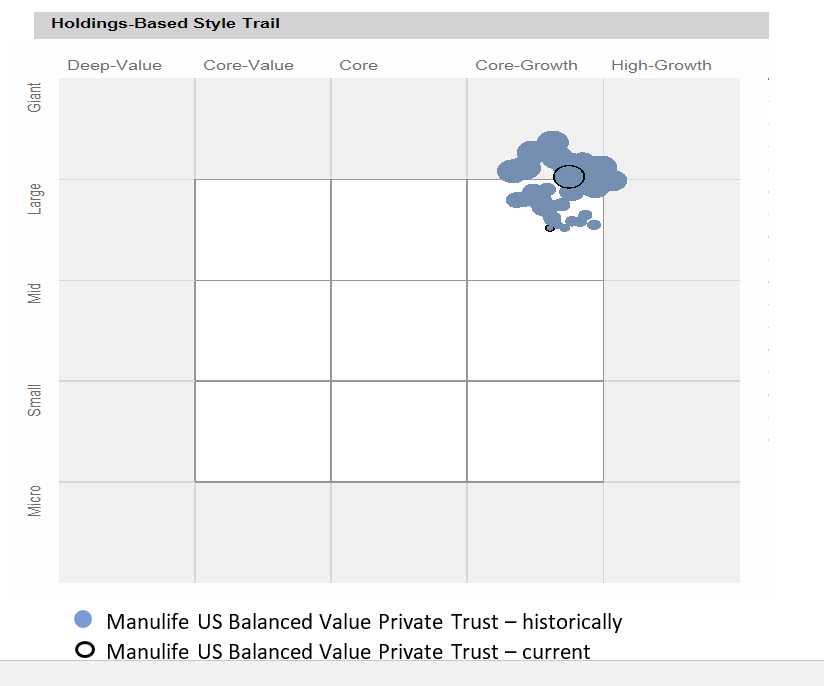 The second lesson of due diligence: Investment fund names don’t always convey what a fund does. Like any other product, names are way to get a potential purchaser’s attention. Investors should consult various sources such as Morningstar, the Fund Facts, a fund’s financial statements and other available documentation, or their financial advisor to go behind the scene and understand a fund’s strategy better.

Evaluating an investment manager or investment solution is complex. It is a detailed process that must go beyond the narrative presented to us. The focus is to understand how past performance results were achieved and to assess the likelihood that the investment process that generated those returns will produce superior, or at least satisfactory, investment results going forward. Due diligence also entails the evaluation of a firm’s integrity, operations, and personnel (i.e. independent quantitative and qualitative analysis). I don’t expect individual investors or advisors to do the level of due diligence that my team and I can do (nor do I think they will reasonably be able to do so comprehensively). Hopefully, the examples and tips I’ve provided will help them avoid some of the most common mistakes. In my next letter, we will explore how investment fund classifications are misleading and how a manager’s perspective of their investment style and process should be taken with a grain of salt (or perhaps a tablespoon!)

A few of you made some helpful suggestions to deal with Leo’s iPhone FOMO. Some suggested I point out that many of my colleagues had older phones. I took their advice and I have to say it failed miserably! Leo’s response was very “altruistic”. He suggested I purchase a new phone, so he could have my iPhone 11 and then he would give his phone to my colleague. “Everyone is now happier and better off Daddy”. Hmm, I’m not sure that everyone is better off. I think my wallet is significantly lighter in that scenario! Maybe I should go back to my original plan and buy him this phone….it was new in 1980! 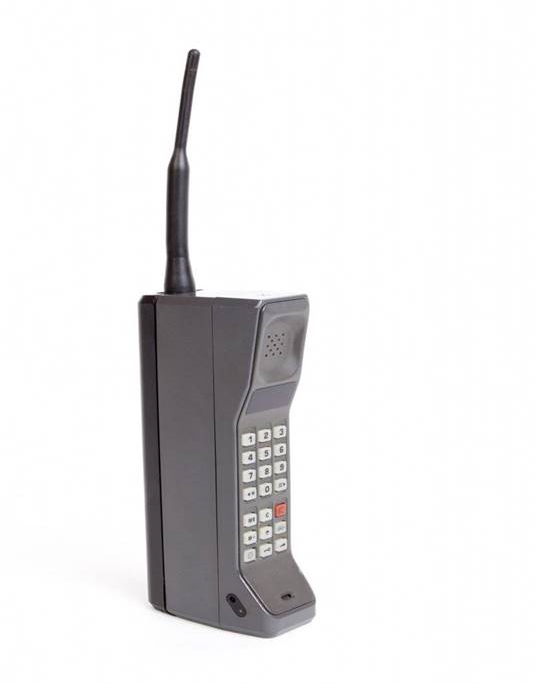 Until next week, stay safe and be well.

More seniors are making complex financial decisions later in life than ever before. Sometimes health changes may affect their ability to make these decisions.

Two-in-five Canadians say money is their #1 source of stress. Even amid a public health crisis, money outranked personal health for the fourth consecutive time

When to Worry about Rising Inflation – and When Not To

It’s hard being an investor. On any given day, there is something to worry about if you look hard enough. If a global pandemic wasn’t sufficient enough, investors are bombarded with news-inducing FOMO one day and fear-inducing volatility the next day